So, hi. I know it’s been a while. Did I mention that my oldest child is graduating from high school in the next couple of weeks? As a mom, it feels surreal. Wasn’t he just learning how to roll over in our first apartment? I realize he’s old enough to vote (thank God). And go to college, which he is this fall. I’m fine, really. I’m so excited for him. Proud of him. But holy schnikies.  You never realize what this feels like until you’re a mom of a teen who is about to graduate.

I’m so thankful for distractions. Meetings, track meets, lacrosse games, banquets, calls, girls’ nights out, lunches, Netflix parties for one. I’ve had all of the above, thank you very much. I am the queen of distractions. My friends and I joke that we are a lot like the dog in the movie Up that has a voice simulator. Even in the middle of a life or death mission, the minute he sees a squirrel, he runs to it. To avoid the inevitable.

In this scenario, which is my so called life, the inevitable is change.

Graduation is coming soon. I’m excited for my son and his friends.

I’m fine. I really am. I’m a mom of teens. I know how to adapt. Heck, ever since I was a teen, I’ve been the master of adapting to change. Moving from Texas to Rhode Island in the middle of high school can have that effect on you. Imagine showing up on the first day of school in cowboy boots pronouncing your Rs. In the middle of a Rhode Island suburb. That’ll make you grow up fast.

I’ve had a lot of distractions over the past few months. I ended up getting lost in everything except my saving grace. Right here. Write here. Where I usually spit things out on the page so quickly, they don’t take up as much space in my mind. The truth is, I’ve been writing professionally, but not for myself.

I’ve been distracted. Too distracted for my own good.

I think I hit my breaking point when I caught a nasty cold a few days ago. I took enough vitamins and supplements to bring a squirrel down. I tried to pretend I was Ok, and even managed to go out with my girlfriends. But by the end of the night, my voice got so hoarse, my inner Demi Moore was beginning to shine. My throat was on St. Elmo’s fire. I had no choice but to crawl into bed, exhausted both physically and emotionally. On one of the most beautiful holiday weekends of the year. I was protected from the sun, under the covers. In my room. I started sneezing and coughing at the same time. I’m calling it a snough. Not a pretty sight. I became glued to Netflix like the mom in the movie Joy starring Jennifer Lawrence (played brilliantly by actress Virginia Madsen, who never left her room). 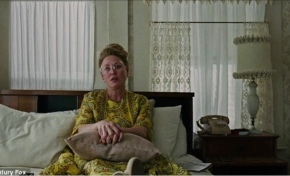 Photo from 20th Century Fox- from the movie Joy.

My TV became my best friend for two days straight. I’ve named her Fern. I binge watched enough shows that should have been spread out over the course of two months. I hid under the covers as the sun snoughed through the blinds. But no. I yanked the shades down lower. I looked out on my back porch a couple times, then slid under again. Blew my nose. And gobbled up The Imposters. Then Renee Zellweger in her new series. Distracted by her plastic surgery, or non plastic surgery but different and not-exactly-just-as-you-are-Bridget face, on one of the sunniest, clearest days of the year. I wasn’t going on a ferry. Or to a friend’s cookout. I wasn’t hanging with my friends and family. I wasn’t heading for dinner with my husband. Not with a high fever and a head cold like I had. Then I rolled out of bed today to a wake-up call. It’s a longer story, but the gist is my laptop was screaming my name. Fern needed to go bye bye.

I needed to get back here. Write here. Or else I’d end up like the mom in the movie Joy.

No one wants to be stuck in bed, lost in a land where Erica Kane’s twin lives on forever.

At least not when you have only one life to live. That’s another soap, another dish for another post. SQUIRREL!

2 thoughts on “Queen of distractions”